There's something very special about a 24 hour citybreak. The pace, the excitement, the sheer novelty of being in two countries on both days; all things we relished in when we spent 24 hours in a city that rivals Paris for stupendous Gothic architecture.

Excuse the grand sweeping statement here, but I don't think it's a secret that boyfriends are often notoriously hard to buy for, and that experiences tend to be much more memorable than a physical gift. With that thinking in place, my birthday card to my boyfriend last October said 'Happy birthday David, we're going to Milan next weekend!' (Followed by some romantic chatter, obvs.)

Keep reading until the end for my Top Tips on 24 hours in Milan! 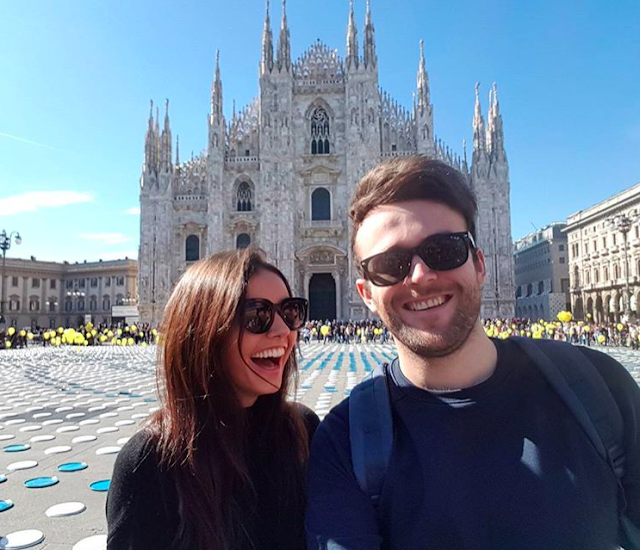 2 hours on a plane, a short train ride and a few stops on the metro later, we came up from the underground and out to the most glorious blue skies, and the Duomo herself. I can't quite explain the surprise or the sheer grandeur that we were greeted with upon popping out of the metro like a pair of whack-a-moles, just to see THIS immediately in front of us. She's a beauty. 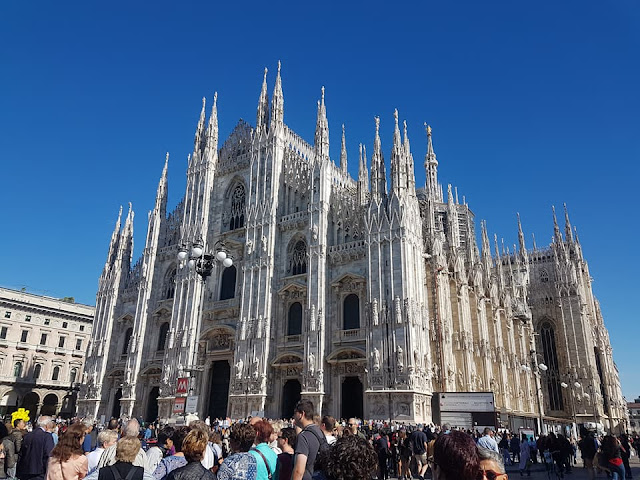 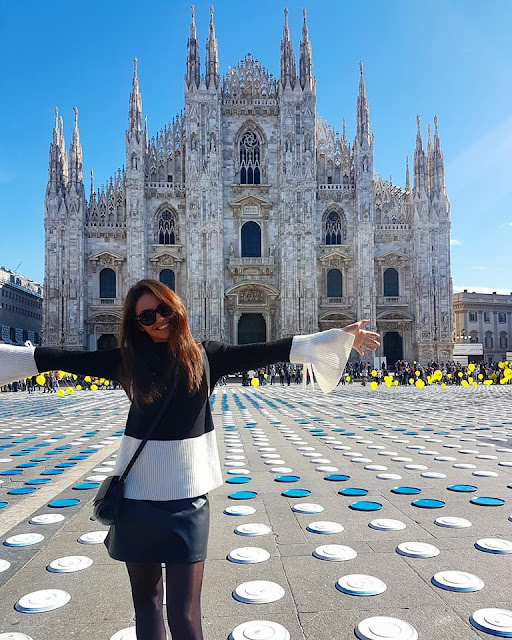 Now you may be wondering, what's all that on the floor? My answer for you may not satisfy: from what we could gather, our first day in Milan seemed to coincide with some kind of plate festival. If anyone can enlighten me further on this, please do. 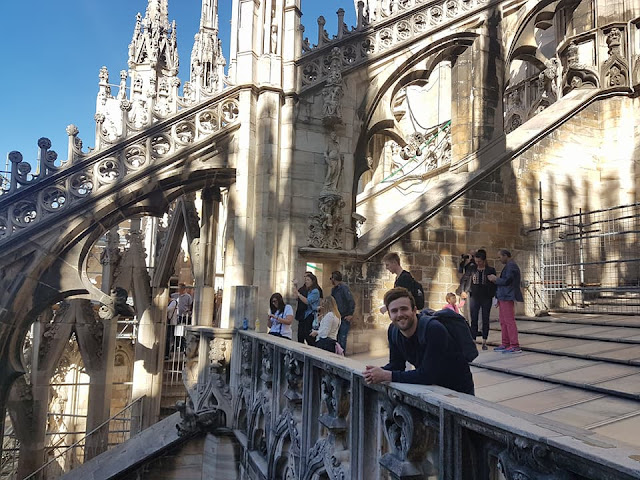 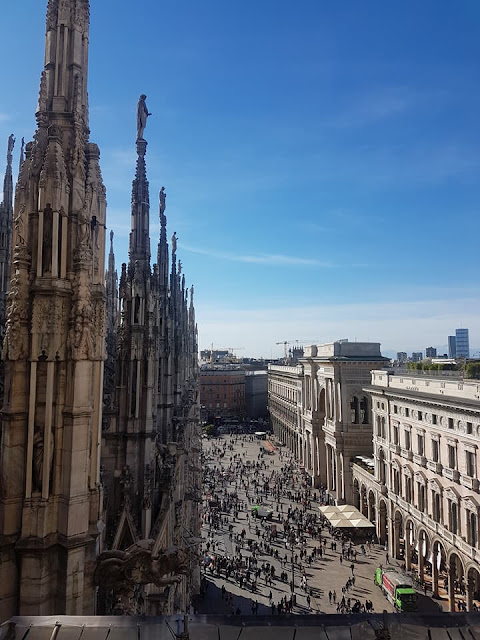 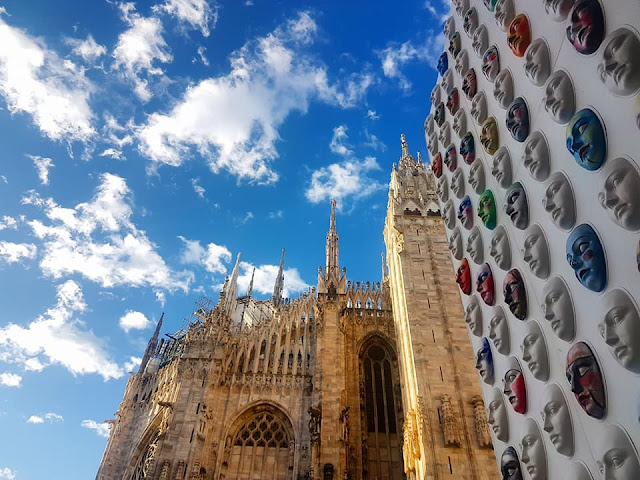 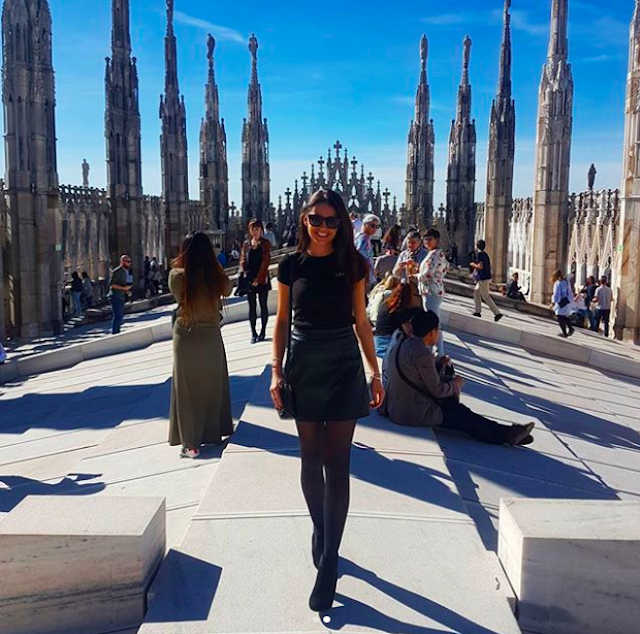 A short stroll to find a pizza (of course) and a hefty bit of queueing later, we found ourselves on the roof of the Duomo. We'd been blessed with the most glorious sunny day, but being mid-October, is was a chilly one. However the moment we got up to the top - which by the way involves some fairly sketchy staircases that don't have very high walls to stop you seeing the plate festival up close - we were bathed in warmth and beautiful views.

For an architecture fiend, this part of the day was absolute heaven, but what made the visit to the top of the Duomo even more grin-inducing were these two things: 1) the fact that Italians were literally using the roof as a sunbathing spot, lying down with music on and soaking up the vitamin D in October, and 2) that a busker down on ground level was playing Eddie Vedder - Guaranteed, a song from my favourite film Into the Wild that I have never heard outside of that film, let alone in this kind of set up. Needless to say, it was a special twenty minutes on the roof. 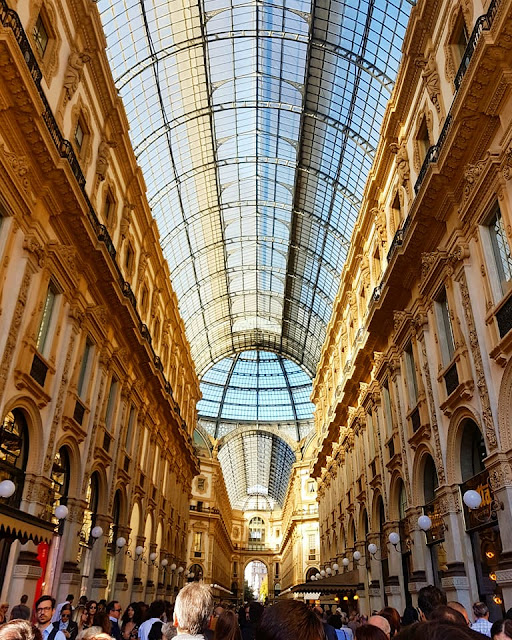 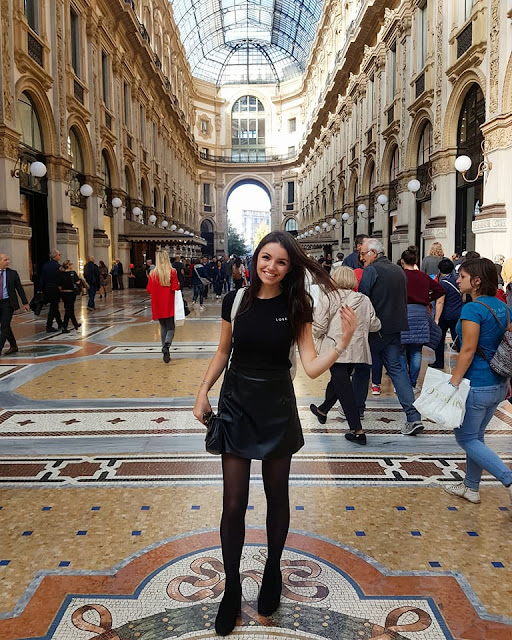 Next we took a stroll to the Galleria Vittorio Emanuele II, which is barely a stone's throw away from the Duomo, to take in some more gorgeous architecture (the Italians really know what they're doing with some bricks and a paintbrush or two don't they?), admire Prada's window displays and take a spin on the lucky bull (a painting on the floor that you have to spin on with one leg, three times. I didn't have the coordination for it.) 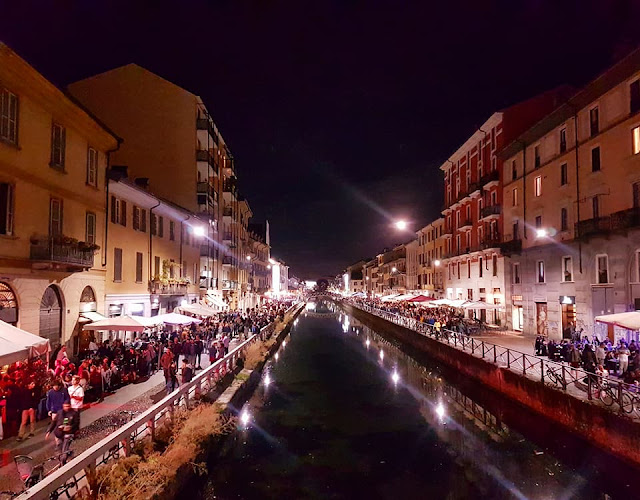 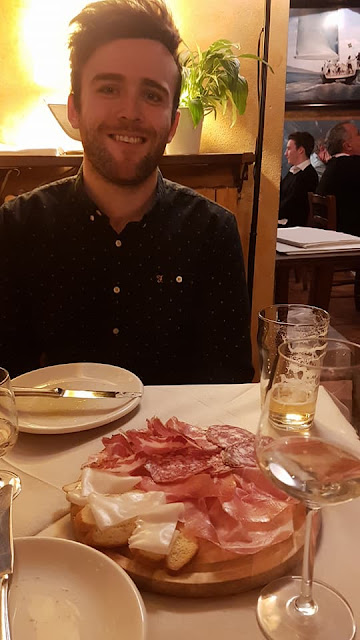 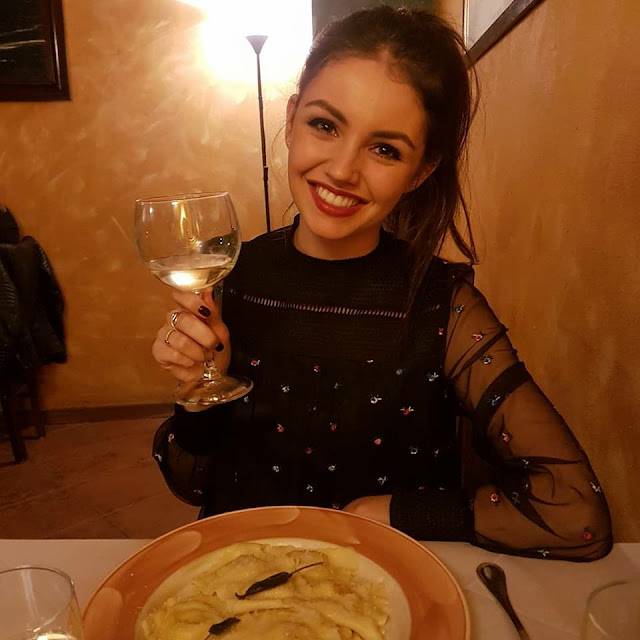 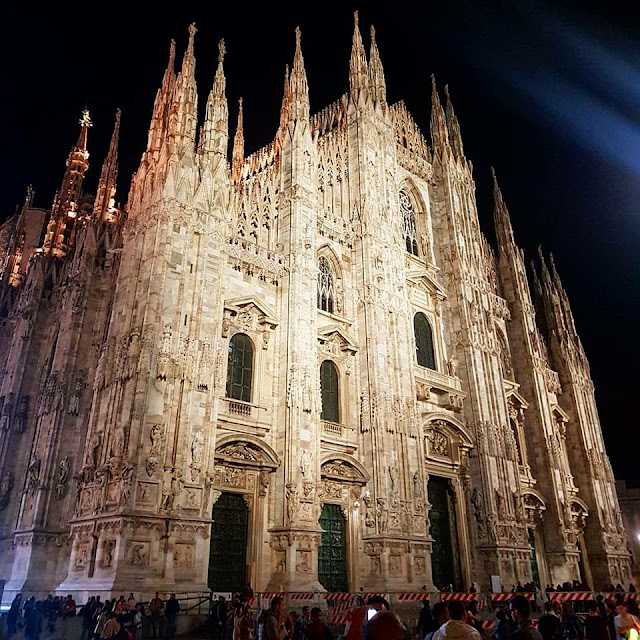 For dinner, we left the centre of town and took an Uber to the Navigli district, having been told by several friends and colleagues that this was a must-see spot outside of the centre of Milan. A nightmare journey later (more on that below), we arrived at the most lively canal, teeming with people and streaming with incredible restaurants and bars. We spent the best part of half an hour looking at every possible option on one side, crossing over the canal on one of the adorable bridges, and assessing the other, just to eventually go back and revisit an earlier find. We found our home for the evening in Ristorante Bellariva, and took it upon ourselves to devour every carb and last drop of wine available to us. From the bread and the steak to the pumpkin ravioli and boozy dessert truffles, everything we indulged in was a delight. When in Milan, eat everything, right? 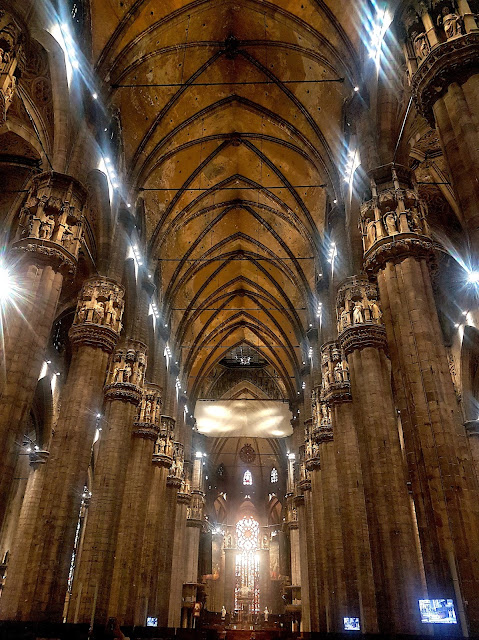 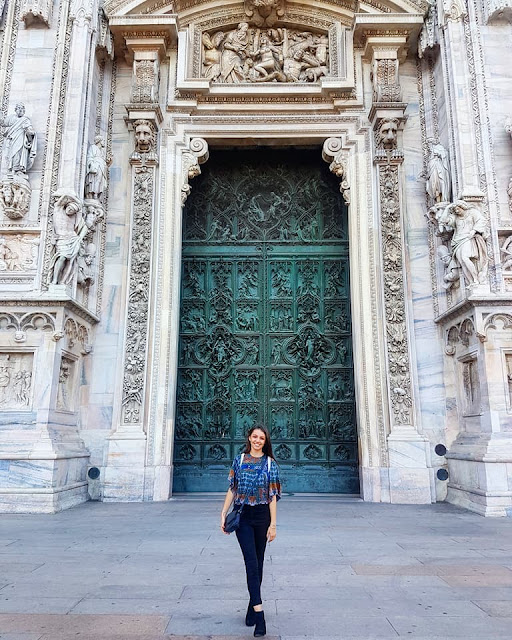 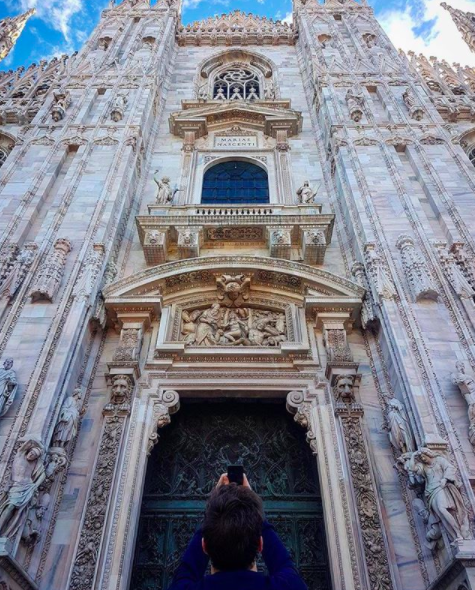 The morning rolled around, and though the plate festival had ended, the centre of town had been taken up with another event - some kind of Milanese fun run that suddenly explained to me exactly how the locals ate so much pasta yet stayed so svelte. Our flight was in the early afternoon, so we checked out of our hotel first thing and visited the inside of the Duomo (not before battling through a sea of Italian runners - the whole thing was rather tricky). Just before leaving, we found a doughnut place in one of the arches lining the square. How better to end a fantastic 24 hours than by soaking up the city's atmosphere with a sugary snack?

Top Tips for 24 Hours in Milan:

1. Ubers here are a little bit of a nightmare. There aren't many of them, and they're incredibly expensive, which we discovered on our way to the Navigli District. Half an hour wait whaaaaat? HOWEVER, if you walk as little as five minutes away from the hotspot you're inevitably ordering an Uber from, the price drops enormously. When we ordered a car from Navigli, the estimate back to our hotel (which turned out to be less than a 15 minute ride) was close to €40. We walked less than 10 minutes away from the main road, and got one for €12.

2. Queuing for the Duomo. The tip here is that if you want to see the inside and the roof - which I would recommend - buy the ticket that allows you to see it all within a certain amount of time (I think its 2-3 days). And definitely do not get into the enormous snaking queue outside of the Duomo without your ticket - the ticket offices are surrounding it instead - see this link for more info. As we arrived around midday on day one, we found the best option was to buy our pass, then queue for the roof (which if you're only doing one, make it this one), and return to the inside of the Duomo at 9am the next day for no queue at all. The queue for the inside in the middle of the day can be anything between 2-4 hours, which takes up a hearty chunk of your 24!

3. La Terrezza is a rooftop bar in La Rinascente department store. The store itself was magical, though we were only in it very briefly. Milan is the city of shopping, and this made me see why - Selfridges, take note. The rooftop bar is beautiful and is right next to the Duomo, but it does get incredibly busy. Our plans for an early breakfast there on Day 2 were scuppered by the street closures for the marathon, but I would definitely go back.

4. Logistics were much easier than anticipated. We flew into Malpensa Airport (MXP) and it was around a half hour train away. Hotel-wise, we stayed in NH Collection Milano President, which was a beautiful 5* (but relatively affordable for one night) hotel around a ten minute walk from the centre square. In all honesty, we were barely in the hotel, but the staff were incredibly helpful and the entire hotel was beautiful. I wouldn't hesitate to recommend them.

I hope you've all enjoyed this recap of our flying visit to Milan!